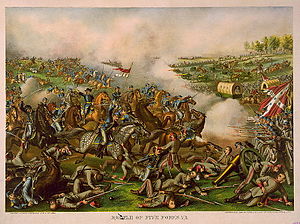 The Battle of Five Forks was fought on April 1, 1865, southwest of Petersburg, Virginia, around the road junction of Five Forks, Dinwiddie County, at the end of the Siege of Petersburg, near the conclusion of the American Civil War. The Union Army commanded by Major General Philip Sheridan defeated a Confederate force from the Army of Northern Virginia commanded by Major General George Pickett. The Union force inflicted over 1,000 casualties on the Confederates and took up to 4,000 prisoners while seizing Five Forks, the key to control of the South Side Railroad, a vital supply line and evacuation route. After the Battle of Dinwiddie Court House (March 31) at about 10:00 pm, V Corps infantry began to arrive near the battlefield to reinforce Sheridan's cavalry. Pickett's orders from his commander General Robert E. Lee were to defend Five Forks "at all hazards" because of its strategic importance. At about 1:00 pm, Sheridan pinned down the front and right flank of the Confederate line with small arms fire, while the massed V Corps of infantry, commanded by Major General Gouverneur K. Warren, attacked the left flank soon afterwards. Owing to an ‘acoustic shadow’ in the woods, Pickett and cavalry commander Major General Fitzhugh Lee did not hear the opening stage of the battle, and their subordinates could not find them. Although Union infantry could not exploit the enemy's confusion, owing to lack of reconnaissance, they were able to roll up the Confederate line by chance, helped by Sheridan's personal encouragement. After the battle, Sheridan controversially relieved Warren of command of V Corps, largely due to private enmity. Meanwhile, the Union held Five Forks and the road to the South Side Railroad, causing General Lee to abandon Petersburg and Richmond, and begin his final retreat.
Source : https://en.wikipedia.org/wiki/Battle_of_Five_Forks