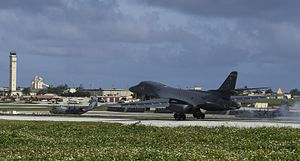 Andersen Air Force Base (Andersen AFB, AAFB) (IATA: UAM, ICAO: PGUA, FAA LID: UAM) is a United States Air Force base located primarily within the village of Yigo in the United States territory of Guam. The host unit at Andersen AFB is the 36th Wing (36 WG), assigned to the Pacific Air Forces Eleventh Air Force. As a non-flying wing, the 36 WG's mission is to provide support to deployed air and space forces of USAF, foreign air forces to Andersen, and tenant units assigned to the base. Andersen AFB was placed under the installation management authority of Joint Region Marianas on 1 October 2009, along with Naval Base Guam. The two bases are about 30 miles (48 km) apart at opposite ends of the island. Established in 1944 after the Liberation of Guam as North Field, it is named for Brigadier General James Roy Andersen (1904–1945).The most important U.S. air base west of Hawaii, Andersen is one of the four Air Force Bomber Forward Operating Locations and the only base in the Western Pacific that can permanently service U.S. heavy strategic bombers, including B-1B, B-2, and B-52 bombers. Andersen is one of two critical bases in the Asia-Pacific region, the other being Diego Garcia in the Indian Ocean. Due to Guam's almost unrestricted airspace and the close proximity of the Farallon de Medinilla Island, a naval bombing range 184 miles (296 km) north, the base is in an ideal training location.
Source : https://en.wikipedia.org/wiki/Andersen_Air_Force_Base