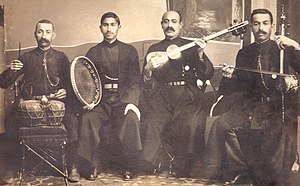 Meykhana (Azerbaijani: Meyxana) is a distinctive Azerbaijani literary and folk rap tradition, consisting of an unaccompanied song performed by one or more people improvising on a particular subject. Meykhana is distinct from spoken word poetry in that it is performed in time to a beat. Meykhana is often compared to hip hop music, also known as national rap among Azerbaijani residents, as it also includes performers that is spoken lyrically, in rhyme and verse, generally to an instrumental or synthesized beat. Performers also incorporate synthesizers, drum machines, and live bands. Meykhana masters may write, memorize, or improvise their lyrics and perform their works a cappella or to a beat.
Source : https://en.wikipedia.org/wiki/Meykhana