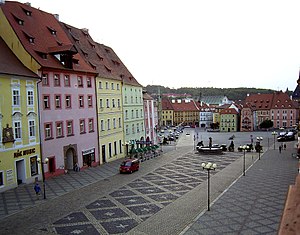 Cheb ([ˈxɛp] (listen); German: Eger) is a town in the Karlovy Vary Region of the Czech Republic, with about 32,000 inhabitants. It is on the river Ohře, at the foot of the Smrčiny near the border with Germany. Before the 1945 expulsion of the German speaking population, the town was the centre of the German-speaking region known as Egerland, part of the Northern Austro-Bavarian dialect area. The name of the town was in 1061 recorded as Egire; in 1179 it was known as Egra; from 1322 as Eger and the surrounding territory as Regio Egere and Provincia Egrensis; after the 14th century also as Cheb or Chba. From 1850 it was given the twin official names of Eger and Cheb. From 1938 to 1945 it was one of the municipalities in Sudetenland. In Arthur Conan Doyle’s Sherlock Holmes story "A Scandal in Bohemia", it is referred to by Holmes as ‘Egria’.
Source : https://en.wikipedia.org/wiki/Cheb