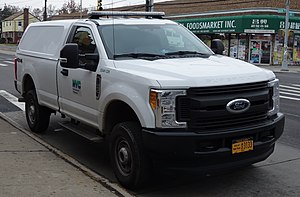 The Ford Super Duty (short for F-Series Super Duty) is a series of trucks manufactured by the Ford Motor Company. Introduced in 1998 for the 1999 model year (the 1998 model year was skipped), the F-Series Super Duty trucks marked the addition of a heavy-duty pickup to the Ford F-Series range with the new versions of the F-250, F-350, and F-450 trucks, while the previous 1987–1997 F-Super Duty chassis cabs were replaced by the F-450 chassis cab and F-550 Super Duty. The Super Duty trucks utilize a distinct chassis from the lighter F-150, with heavier-duty chassis and suspension components to allow for higher payload and towing capacities; additionally, the product line continued the use of Ford PowerStroke diesel engines. With a GVWR over 8,500 lb (3,900 kg), Super Duty pickups are class 2 and 3 trucks while chassis cab trucks are class 4 and class 5. The F-Series Super Duty has been used as the base chassis of the Ford Excursion full-size SUV. Ford F-250 to F-550 Super Duty trucks are assembled at the Kentucky Truck Plant in Louisville, Kentucky, while medium-duty F-650 and F-750s are assembled at Ohio Assembly in Avon Lake, Ohio (prior to 2016, medium-duty trucks were assembled in the Blue Diamond Truck joint venture with Navistar in Mexico). As of 2016, the Ford Super Duty is sold in the United States, Canada, Mexico, Venezuela (F-250 and F-350), Suriname, Brazil (F-350/F-4000), Argentina (F-4000 only), Angola (F-250 and F-350), Cambodia, the Middle East, and Iceland (F-350 only) in LHD only. In Suriname, even though traffic is on the left side of the road, the import and registry of left hand drive vehicles is allowed. In Australia, it was officially imported in right hand drive from Brazil between 2001–06, however as of 2007, Ford no longer offers the Super Duty in Australia.
Source : https://en.wikipedia.org/wiki/Ford_Super_Duty