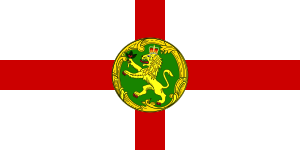 Alderney (; French: Aurigny [oʁiɲi]; Auregnais: Aoeur'gny) is the northernmost of the inhabited Channel Islands. It is part of the Bailiwick of Guernsey, a British Crown dependency. It is 3 miles (5 km) long and 1 1⁄2 miles (2.4 km) wide. The island's area is 3 square miles (8 km2), making it the third-largest island of the Channel Islands, and the second largest in the Bailiwick. It is around 10 miles (15 km) to the west of the La Hague on the Cotentin Peninsula, Normandy, in France, 20 miles (30 km) to the northeast of Guernsey and 60 miles (100 km) from the south coast of Great Britain. It is the closest of the Channel Islands to France and to the United Kingdom. It is separated from Cap de la Hague by the dangerous Alderney Race (French: Raz Blanchard). As of March 2018, the island had a population of 2,019; natives are traditionally nicknamed vaques after the cows, or else lapins after the many rabbits seen in the island. Formally, they are known as Ridunians, from the Latin Riduna. The only parish of Alderney is the parish of St Anne, which covers the whole island. The main town, St Anne, historically known as La Ville ("The Town"), is often referred to as "St Anne's" by visitors and incomers, but rarely by locals (who, in normal conversation, still most frequently refer to the area centred on Victoria Street simply as "Town"). The town's "High Street", which formerly had a small handful of shops, is now almost entirely residential, forming a T-junction with Victoria Street at its highest point. The town area features an imposing church and an unevenly cobbled main street: Victoria Street (Rue Grosnez – the English name being adopted on the visit of Queen Victoria in 1854). There is one school (providing both primary and secondary education), a post office, and hotels, as well as restaurants, banks and shops. Other settlements include Braye, Crabby, Longis, Mannez, La Banque, and Newtown.
Source : https://en.wikipedia.org/wiki/Alderney