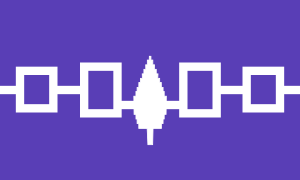 The Iroquois ( or ) or Haudenosaunee (; "People of the Longhouse") are an indigenous confederacy in northeast North America. They were known during the colonial years to the French as the Iroquois League, and later as the Iroquois Confederacy. The English called them the Five Nations, comprising the Mohawk, Onondaga, Oneida, Cayuga, and Seneca. After 1722, the Iroquois accepted the Tuscarora people from the southeast into their confederacy, as they were also Iroquoian-speaking; the confederacy became known as the Six Nations. The Iroquois have absorbed many other individuals from various peoples into individual families of their tribes as a result of warfare and adoption of captives, and offering shelter to displaced peoples. Culturally, when such adoptees become fully assimilated, they are considered full members of the families, clans and tribes into which they are adopted. Historically such adoptees have married into the tribes, and some have become chiefs or respected elders. The historic St. Lawrence Iroquoians, and the later Wyandot (Huron), Erie, and Susquehannock, all independent peoples known to the European colonists, also spoke Iroquoian languages. In the larger sense of linguistic families, these peoples are considered Iroquoian peoples because of their similar languages and cultures, all descended from the Proto-Iroquoian people and language. But politically, they were historically competitors and enemies of the nations of the Iroquois League.In addition, Cherokee is an Iroquoian language: the Cherokee people are believed to have migrated south from the Great Lakes in ancient times, settling in the Appalachian backcountry of the Southeast United States, including what is now southeast Tennessee, western North and South Carolina (where they were first encountered by English traders and colonists, and northeast Georgia. In 2010, more than 45,000 enrolled Six Nations people lived in Canada, and over 81,000 in the United States.
Source : https://en.wikipedia.org/wiki/Iroquois