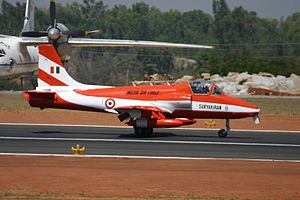 The HAL HJT-16 Kiran ("Ray of light") is an Indian two-seat intermediate jet-powered trainer aircraft designed and manufactured by aircraft company Hindustan Aeronautics Limited (HAL). The Kiran was developed at the behest of the Indian Air Force (IAF), who sought a new intermediate trainer aircraft for its pilots. On 4 September 1964, the type performed its maiden flight; mass production commenced shortly thereafter. It has been adopted by the IAF, which uses the type to conduct intermediate training of pilots following on from basic trainers such as the HPT-32 Deepak and Pilatus PC-7. Furthermore, during the 1980s, the IAF procured a number of Kirans that were furnished with a more powerful engine and a higher number of hard points; the variant was designated Kiran Mk II. It has also been adopted by the Indian Naval Air Arm. The last Kiran was completed during 1989, after which the assembly line was shuttered. The Kiran has been in operational use for over 50 years. Since the late 1990s, an indigenously designed successor, the HAL HJT-36 Sitara, has been in development, but has yet to enter service as of 2019. By the 2010s, use of the type was gradually declining as increasing numbers of newer BAE Systems Hawks, built under license by HAL, have been introduced to IAF service. The Kiran has been used by the Indian naval aerobatic team Sagar Pawan and was also used by the aerobatic team Surya Kiran of the IAF up until February 2011, at which point the team was disbanded after its aircraft were diverted to train fighter pilots. The Surya Kiran display team has been reequipped with specially-equipped Hawks. During December 2018, a handful of Kirans were donated by India to Myanmar.
Source : https://en.wikipedia.org/wiki/HAL_HJT-16_Kiran