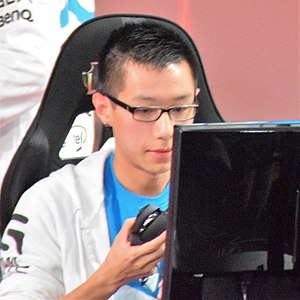 Lâm Du Hải, better known mononymously as Hai, is an American retired League of Legends player. He previously played mid lane for the Golden Guardians of the North American League of Legends Championship Series (NA LCS). Hai rose to prominence as the mid laner for Cloud9 (C9), leading them to two NA LCS championships. During a brief retirement due to health issues in 2015, Hai functioned as the Chief Gaming Officer (CGO) of Cloud9. Hai returned to the lineup of Cloud9 as their jungler and support to fill in for the split playoffs. He later became the mid laner for Cloud9 Challenger, which qualified for the LCS and was bought and rebranded as FlyQuest. Hai has won two NA LCS splits with Cloud9, as well as the NA LCS Promotion Tournament with Cloud9 Challenger. He is well known for his shotcalling within the game. Hai announced his retirement from competitive League of Legends on April 23, 2018 to pursue a career in streaming and content creation. In Spring 2019, he was part of the North America LCS analyst desk.
Source : https://en.wikipedia.org/wiki/Hai_(gamer)