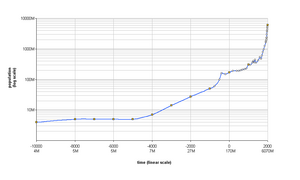 Human history, also known as world history, is the description of humanity's past. It is informed by archaeology, anthropology, genetics, linguistics, and other disciplines; and, for periods since the invention of writing, by recorded history and by secondary sources and studies. Humanity's written history was preceded by its prehistory, beginning with the Palaeolithic Era ("Old Stone Age"), followed by the Neolithic Era ("New Stone Age"). The Neolithic saw the Agricultural Revolution begin, between 10,000 and 5000 BCE, in the Near East's Fertile Crescent. During this period, humans began the systematic husbandry of plants and animals. As agriculture advanced, most humans transitioned from a nomadic to a settled lifestyle as farmers in permanent settlements. The relative security and increased productivity provided by farming allowed communities to expand into increasingly larger units, fostered by advances in transportation. Whether in prehistoric or historic times, people always needed to be near reliable sources of potable water. Settlements developed as early as 4,000 BCE in Iran, in Mesopotamia, in the Indus River valley, on the banks of Egypt's Nile River, and along China's rivers. As farming developed, grain agriculture became more sophisticated and prompted a division of labour to store food between growing seasons. Labour divisions led to the rise of a leisured upper class and the development of cities, which provided the foundation for civilization. The growing complexity of human societies necessitated systems of accounting and writing. With civilizations flourishing, ancient history ("Antiquity," including the Classical Age, up to about 500 CE) saw the rise and fall of empires. Post-classical history (the "Middle Ages," c. 500–1500 CE,) witnessed the rise of Christianity, the Islamic Golden Age (c. 750 CE – c. 1258 CE), the Timurid and Italian Renaissance (from around 1300 CE). The mid-15th-century introduction of movable-type printing in Europe revolutionized communication and facilitated ever wider dissemination of information, hastening the end of the Middle Ages and ushering in the Scientific Revolution. The Early Modern Period, sometimes referred to as the "European Age and Age of the Islamic Gunpowders", from about 1500 to 1800, included the Age of Enlightenment and the Age of Exploration. By the 18th century, the accumulation of knowledge and technology had reached a critical mass that brought about the Industrial Revolution and began the Late Modern Period, which started around 1800 and has continued through the present.This scheme of historical periodization (dividing history into Antiquity, Post-Classical, Early Modern, and Late Modern periods) was developed for, and applies best to, the history of the Old World, particularly Europe and the Mediterranean. Outside this region, including ancient China and ancient India, historical timelines unfolded differently. However, by the 18th century, due to extensive world trade and colonization, the histories of most civilizations had become substantially intertwined, a process known as globalization. In the last quarter-millennium, the rates of growth of population, knowledge, technology, communications, commerce, weapons destructiveness, and environmental degradation have greatly accelerated, creating unprecedented opportunities and perils that now confront the planet's human communities.
Source : https://en.wikipedia.org/wiki/Human_history