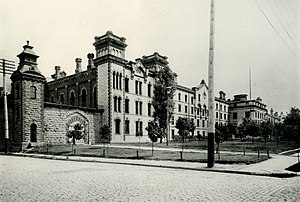 The Ohio Penitentiary, also known as the Ohio State Penitentiary, was a prison operated from 1834 to 1984 in downtown Columbus, Ohio, in what is now known as the Arena District. The state had built a small prison in Columbus in 1813, but as the state's population grew the earlier facility was not able to handle the number of prisoners sent to it by the courts. When the penitentiary first opened in 1834, not all of the buildings were completed. The prison housed 5,235 prisoners at its peak in 1955. Conditions in the prison have been described as "primitive," and the facility was eventually replaced by the Southern Ohio Correctional Facility, a maximum security facility in Lucasville. During its operation, it housed several well-known inmates, including General John H. Morgan, who famously escaped the prison during the Civil War, "Bugs" Moran, O. Henry, Chester Himes, and Sam Sheppard, whose story is said to have inspired the movie The Fugitive. A separate facility for women prisoners was completed within the walls of the Ohio Penitentiary in 1837. The buildings were demolished in 1997.
Source : https://en.wikipedia.org/wiki/Ohio_Penitentiary